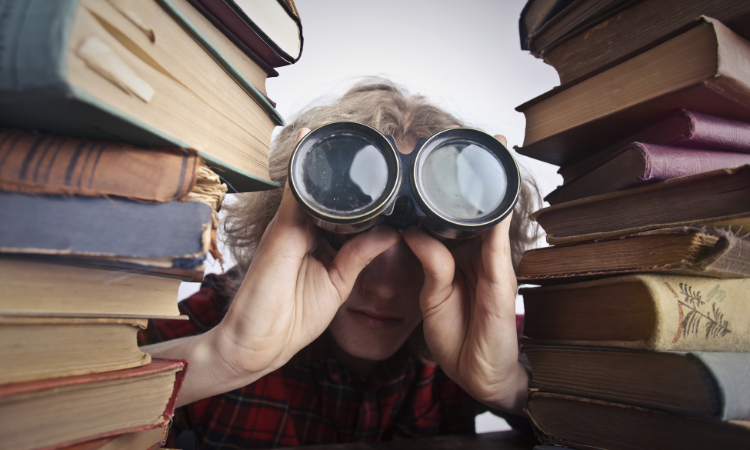 Pay attention to the small things. They turn into big things. (Jocko Willink)

Critical observation is the ability to notice subtle details or gain them through analysis that allows to maneuver situations more tactfully. Our observation skills inform us about objects, events, attitudes and phenomena using one or more senses, thus forming a basis for efficient and fruitful communication. Critical observation is a so-called soft skill, but can bring hard results.

In the modern workplace, critical observation gives employees the ability to see a problem before it’s even on the horizon, and to interpret research data in order to meet the evolving needs. This becomes increasingly important, as employees are being expected to deliver more interpretive solutions, not just doing assigned tasks copy-paste

without improvising. The ability to catch subtle nuance in speech or situations deepens the strategic value one can bring to the hiring organization.

It sounds easy enough: paying attention to subtle details that might otherwise be missed, whether in others’ behavior and appearance or in the situation around us. But critical observation is a real skill and one that requires constant practice.

‘Learn to pay attention to the small things. We often overlook the nuances of situations and then wonder why things unfolded the way they did. Pay attention. Little things matter; they matter less, but they matter’, says Jocko Willink*, a Navy SEAL for twenty years, rising through the ranks to become the commander of Task Unit Bruiser – the most decorated Special Operations Unit of the Iraq War.

Curiosity is the first key to observation of any sort. Take an interest in the person / phenomenon / situation you’re interacting with, and it’ll be easier to spot details that you might otherwise miss.

Sherlock Holmes and his famous method of deduction could be seen as the typical example of critical observation. Holmes wasn’t just analyzing what he was expecting to see, but was curious about tiny things that led him to something unexpected.

This simple deduction shows the extent of Holmes’ attention to detail and his realization that sometimes the most important clues are the events that didn’t happen. Holmes realizes that the perpetrator of the crime must have been someone familiar to the household, as the dog didn’t bark when the perpetrator approached.

The role model for good critical observation is also a Juror #8, Davis (portrayed by the late Henry Fonda). He is the main protagonist in the teleplay and movie 12 Angry Men, the eighth of the twelve jury members.

In 12 Angry Men, Fonda’s character refuses to accept the view of the other 11 jurors that the accused teenager boy is obviously guilty. Juror #8 notes details about the murder case in question that others have missed. Slowly the rest of the jury is won around as their reservations are overcome and they become convinced that there are flaws in the evidence against the accused.

Critical observation requires a skeptical outlook. It takes time and energy. Question what you are being told, dig deeper than surface-level impressions. Do not accept conventional wisdom or the myths and rumors which tend to circulate in businesses and organizations.

Skepticism and critical observation rarely make a person nice and popular in the eyes of others. So, it needs to be rationed. However, such thinking can also help avoid a lot of unnecessary and damaging mistakes, both in personal relationships and professional fields.

Encourage training participants to watch the 12 Angry Men (the 1957 film with Henry Fonda or the 1997 TV film with Jack Lemmon).

Juror #8 is an architect who is called in for jury duty to discuss the case of a teenager boy who was allegedly believed to have stabbed his father to death. The jurors are told to come up with an unanimous vote: the boy will receive a death sentence if declared guilty. Throughout the story, Juror #8 is the only person who votes ‘not guilty’ while almost everyone else votes ‘guilty’.

The aim of the activity:
Practicing and analyzing personal observation skills.

How many people the activity is suited for:
Individual work with group discussion afterwards.

How many instructors are needed?
One for moderating discussion.

Other requirements for the activity (space, equipment…):
At home / auditorium / online session.

Description of the activity:
While watching the move, ask participants to observe how things are going on. Discuss what Juror #8 is doing that it becomes so influential and persuasive. For example, elaborate on the wording by Juror #8 after conducting an experiment to see if the old man could have reached his door in 15 seconds. Ask participants to count episodes they find crucial for revealing the truth, and arrange a mini-contest to find out who has counted more.

Hint:
Old editions can be replaced with 2019 South Korean legal drama Juror 8 of the same length, but different plot.

Learn to observe yourself critically, first. Imagine yourself in a fairly common situation, like an employee who is struggling to meet his/her deadlines. With sharp critical observation skills, you will be able to notice that you have trouble with deadlines that fall on the X week of the month. Break this week down in details. Is your spouse on shift work that week? Do you have child care / household running / transportation issues because of this?

Knowing the answers, you can earlier start your monthly tasks or ask for a flexibility to work from home on the X week. Had this pattern not been observed, you would have assumed yourself (or be assumed by your boss) as an inefficient employee and poor time manager. So, it is important to understand how your daily tasks fit into the bigger monthly picture.

Employees who are skilled at critical observation also know how to use the talent for self-growth. They tend to be more self-aware and self-confident, due to the fact that they have the ability to identify their strengths and weaknesses more effectively. Therefore, give yourself time to reflect after each activity, such as meeting, training session, event, etc. It will help you to absorb the information and analyze it better.

Which type of observer are You?

The aim of the activity:
Practicing and analyzing personal observation skills.

How many people the activity is suited for:
Individual work with group discussion afterwards.

Time requirement of the activity:
5-10 minutes, and up to 15 minutes for moderated discussion.

How many instructors are needed?
One for moderating discussion.

Other requirements for the activity (space, equipment…):
At home / auditorium / online session.

Description of the activity:
Tick the boxes below and find out which type of critical observer you are. 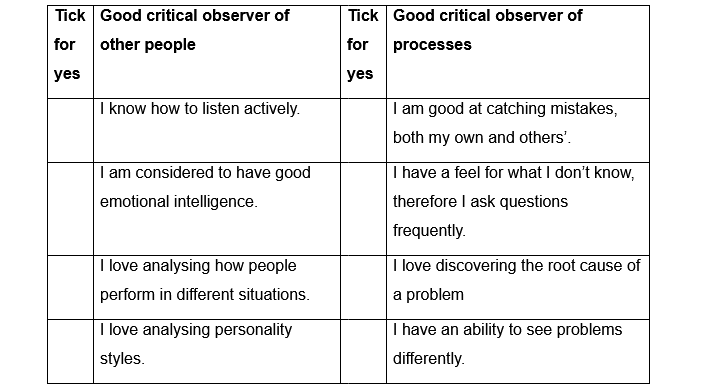 No matter how many boxes you ticked–each of the skills listed can be brushed up through practicing. Find several useful tips below.

Emotional intelligence helps you to understand why a person behaves this way and how that matters, instead of concentrating on what the person did. This type of intelligence, also often replaced by term empathy, helps in understanding emotions, including those of colleagues and our own, better stress handling, conflict resolution, and ultimately better work production.

Unconscious bias can sneak in and undermine our perceptions of people, no matter how open-minded and fair people we consider ourselves. Those who have trained up their critical observation skills are most aware of their potential unconscious biases and actively work to correct for them. Watch a 9:46 min long video on unconscious bias and discuss it in a group. Have you ever been in situations described in the workplace scenarios? 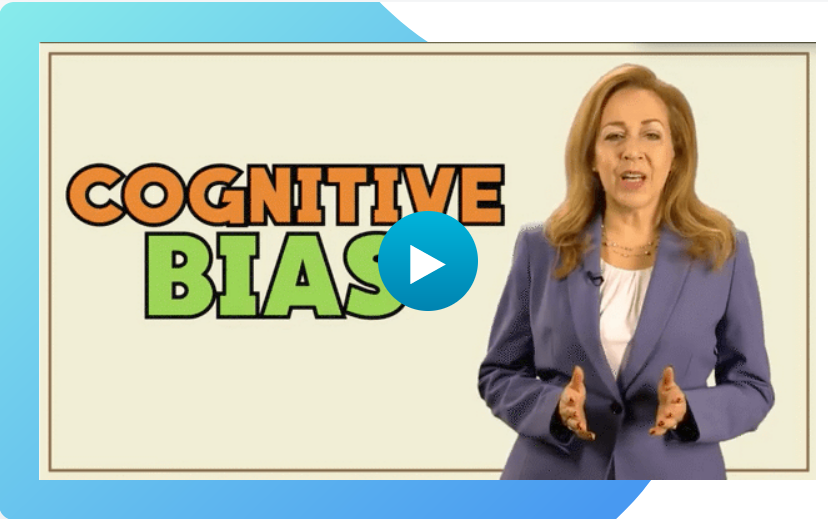 Discovering the Root Cause of a Problem is one of the strengths people who are keen observers of processes have. They can dig deep into the cause of a problem, even if that cause is not obvious to the casual observer. The better you get at critical observation, the better you are able to find answers to why? Questions. For practicing, try the method The 5 Whys by watching 5’43’’ video below. 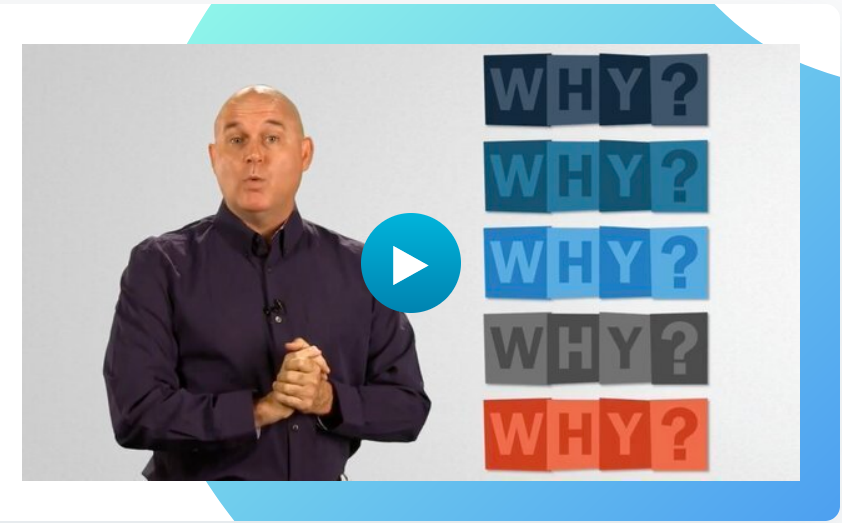