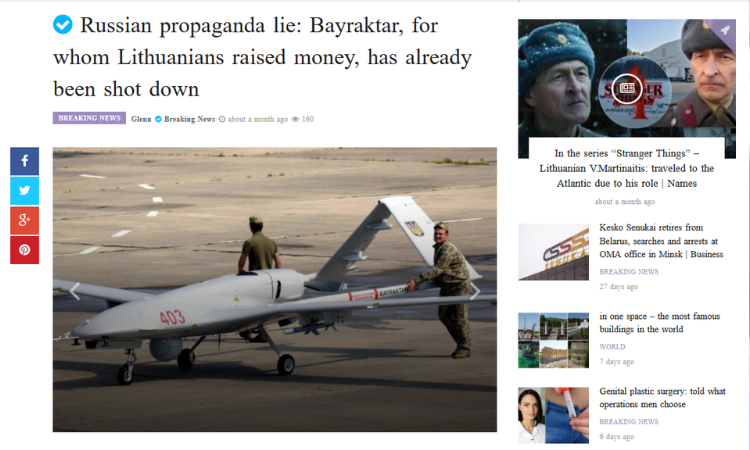 Propaganda is defined as deliberate and consistent dissemination of theories and ideas in philosophy, science, religion, etc., in order to educate people using them, influence people’s views, moods, manipulate with, promote certain actions that would contribute to the goals pursued by the propagandist. Propaganda aims to affect the emotions and opinions of the target group.

The effectiveness of propaganda is enhanced by partially telling the truth but not providing all the information and concealing the facts. Therefore, recognizing propaganda can sometimes be difficult. Propaganda presents certain correct facts, but changes or distorts the whole context. The accuracy of the facts presented can be verified, so the message sent by the propaganda seems to be true. However, this is intended to be misleading.

Propaganda is often defined in a negative context as an unacceptable, disinformation-based means of shaping public opinion. Synonyms used to describe propaganda are including but not limited to, lie, deception, distortion, manipulation, brainwashing, thought control, and psychological warfare.

However, propaganda is also used for marketing, social and educational purposes, i. e. propaganda can work in a positive context, and the most important thing is what it is used for. For example, the representations of harm of smoking on cigarette boxes. It is also propaganda because it has an attempt to influence people with emotions and change their behavior, i. e. to force them quit smoking. However, propaganda is most often used for negative purposes to incite hatred and hostility.

Propaganda is constantly affected by social, technological, cultural, and economic changes. It must therefore adapt and act in a way that is in line with the personality of the modern man. Propaganda is often associated with posters of World War II, but it has now taken on a variety of more subtle forms. The way it works can be as obvious as a swastika or as subtle as a comment on a news portal.

According to objectivity, propaganda can be divided into white, gray, and black.

White propaganda
is the most transparent and open representation of facts. It is used for various social programs and initiatives. White propaganda seeks to present the findings of independent experts that reflect key views.

However, with skyrocketing competition among different public and business organizations, it is becoming increasingly difficult to determine the fairness of the approach, and the views of experts on the same issues are becoming very different. We, therefore, call white propaganda an intention to provide reasoned explanations without any efforts of distorting the facts.

Most often, white propaganda talks about the achievements of country, company, or organization and is positive. For example, the Republic of Lithuania promotes and demonstrates itself as a bridge between the West and the East, where an investment-friendly climate exists and financial security is guaranteed. This is propaganda, although it is based on correct information provided by official sources.

Gray propaganda. Its representatives deliberately associate the confirmed facts with the unconfirmed ones, presenting only an interpretation in their favor, and deliberately distort the context of the event. Gray propaganda is intensively used in guided informational, political or economic conflicts.

Gray propaganda forms a one-sided approach to the subject, avoiding criticism. Such propaganda, for example, states that one’s own army is always right. Representatives of this propaganda avoid the open dialogue which may end in a disclosure, but still do not stick to a one-sided lie, leaving their attitude the opportunity of changing.

Gray propaganda is widespread on Russian television channels ORT and RTV during the presidency of Vladimir Putin, when any information about Putin and Russia is presented positively, even though the international forum strongly criticizes Russia for certain decisions.

Black propaganda is based on the deliberate falsification of events and facts, i. e. lies. It was particularly prevalent in Nazi Germany, where methods of event staging were used. The Nazis, for example, disguised in uniforms of Soviet soldiers, ravaged the Polish villages, intimidating locals with the impending communist rule and its consequences.

Thus, propaganda communication is usually not entirely objective and presents facts selectively in order to influence attitudes. Overcrowded language is often used to elicit an emotional response to the information presented rather than the mind.

In the digital age we live in now, this conscious attempt to spread biased information is also taking place on digital platforms. Its purpose is to mislead and deceive. So we can speak boldly about “digital propaganda” (Bjola, 2018, p. 307).

As the propaganda process moved into the online space, new forms of propaganda known as trolls and bots emerged. Their purpose is to influence election results, demoralize, discredit or isolate political opponents, participate in public opinion polls, and spread propaganda and false news.

Trolls are tens of thousands of people hired by propagandists to work all day (or night) on the target group’s news portals, social networks to comment on the latest news and posts and to raise a stallion among Internet users, spread misinformation, despise prevailing values ​​and attitudes (Grigaliūnas, 2016).

How to recognize a troll?

A bot is a computer program that automatically performs certain actions that a person working on a computer can perform. In propaganda, bots are used to write propaganda comments on news portals and posts on social networks. These programs generate different comments: a template is created and a new comment is regenerated from that template. Proxy servers provide different IP addresses, so it seems that many different people write comments. For example, about 15 percent of social network Twitter users are bots.

How to recognize a bot?

You can check if you are not following bots on the Twitter social network here: https://botcheck.me

By the way, there are not only trolls but also elves. These are usually active and civic people who reveal various misinformation and manipulations, fighting the disseminators of false news and propaganda in the online space.

Means of influencing that can be used as propaganda

Generalization is an attempt to influence emotions by using abstractions; it is one of the simplest forms of propaganda. This method is often used during the election campaigns of politicians. This method is particularly effective in difficult times, such as an economic crisis. Emotional summative statements are often used, such as We deserve to live better, For the future, Order will be, Every man is of utmost importance, etc.

Symbols help in enhancing the one’s image. For example, a person in a photograph is surrounded by certain symbolic objects that form an image that that person is promoting the values ​​symbolized.

Labeling is when a negative idea, action, term is associated with a specific person, organization, and so on. Sarcasm or ridicule is often used. This is an effective way of propaganda, because sticky labels – liars, terrorists, corrupt – are hard to get rid of.

The herd’s feeling creates an image that the idea has widespread acceptance, so rejecting it risks being isolated and out of place.

Emotional arousal seeks to evoke such strong emotions as fear, anger, sadness, and resentment. The most common attempt is to show that one or another phenomenon will have negative consequences, using a variety of human fears.

Card stacking is when only positive facts are told and negative facts are silenced. Although the arguments used in using this technique are usually valid, statistics are often presented that can distort the situation because information is taken out of context or important facts are omitted. In political campaigns, a candidate is presented only on the positive side, omitting the negative.

A quick check of the accuracy of the information on the website can be done using C.R.A.P. test (Currency, Reliability, Authority, and Purpose / Point of View). This test makes it possible to find out when and under what circumstances the published text was written, how reliable its author is, and finally, the purpose and attitude of this information (CyberWise, 2019).

The best ways to repel propaganda:

Russian propaganda lie: Bayraktar, for whom Lithuanians raised money, has already been shot down

‚Hundreds of Lithuanians collected 4.7 million in three and a half days. dollars to buy the unmanned Bayraktar in Ukraine. He was shot down 3.5 minutes after his first rise‘.

It is presented as an ‚anonymous Twitter channel that publishes fictional news‘. Commenters did not seem to pay attention to this detail and took the message seriously.

In May 2022, hundreds of Lithuanians have chipped in together to buy an advanced military drone for Ukraine in its war against Russia in a show of solidarity with a fellow former Soviet Union country.

The target of €5 million was raised in just three and a half days — largely in small amounts between €5 and €100 — to fund the purchase of a Byraktar TB2 military drone, according to Laisves TV, the Lithuanian internet broadcaster that launched the drive.

The drone has proven effective in recent years against Russian forces and their allies in conflicts in Syria and Libya, and its purchase is being orchestrated by Lithuania’s Ministry of Defence.

The aim of the activity: practicing and analyzing personal observation / critical thinking skills.

How many people the activity is suited for: individual work with group discussion afterward.

Time requirement of the activity: 97 minutes for movie watching, and up to 15 minutes for a moderated discussion.

How many instructors are needed? One for moderating discussion.

Other requirements for the activity (space, equipment…): at home/auditorium / online session.

Description of the activity: While watching the movie, ask participants to observe how things are going on.

Invite group members to reflect on several aspects of the political phrase ‘wag the dog’.

Secondly, if you say that the tail is wagging the dog, you mean that a small or unimportant part of something is becoming too important and is controlling the whole thing.